RULE NO.1: DO NOT BELIEVE YOU NEED TO LEARN THE FOUR TONES

Almost every Chinese teacher, either on line or off line, tells you that Chinese is a tonal language, and you need to learn the four tones, and others will fall in place. That’s absolutely wrong! They are just repeating themselves. When we were kids, our parents didn’t even know there are four tones in Chinese. And they still don’t know that. If you ask my mother about the four tones of Chinese, she would think you are talking about English!

So No, you don’t need to learn the four tones, and things will also fall in place without them.

When our parents were teaching us how to talk, it didn’t matter if the tones were correct, as long as we chose the right words! And if we used the right grammar, they would be very happy. Nobody cared about the tones, accents at the time. It is really a small matter. We learned to say with the right tones later, in school, in the street, with neighbors, friends. Actually the tones came so natural, we didn’t even learn.

RULE NO.2: DO NOT LEARN CHINESE CHARACTERS

That’s it. Just ignore what other teachers told you about the Chinese characters. They are not living in a modern time, or just too lazy to think about change. I am not saying this because I want to get your attention. I am a Chinese living in China, and I have not written a word for at least a week. I think in a year I only write max. 1,000 Chinese characters with a pen. All the words are written on computer or smart phone now!

It’s not that hard to accept this fact, isn’t it?

Then how do we write? We write in pinyin, just like you are going to learn in our course. Pinyin is based on letters.

RULE NO.3: DO NOT GO TO A SCHOOL TO LEARN MANDARIN

Nowadays you could even attend a class in Harvard/Standford/Yale, without paying a penny! If you have not heard of this, Google “edX learning platform”.
So Why go to a school to learn Mandarin? There are so many online courses for Mandarin/Chinese language. Most of the teachers are native Chinese speakers like me. I have been a helper in a community English learning class in Chinatown, Manhattan for a few times, and I really do not see much progress among those senior American Chinese.

I basically learned English by myself, and I have never been to an English school. My major in college is engineering. After college I could barely speak any English at all, just like every Chinese college student. How did I learn? Internet!

RULE NO.4: FIND A PENPAL LIVING IN CHINA

There are many English learners living in China, and they would love to have a penpal who wants to learn Mandarin. If you are patient enough, you may find someone who is interesting, educated, kind, and patient. I know a friend in NYC who has a friend living in Beijing. They have been talking to each other for years, and later on they visited each other’s homes.

When I was learning English years ago, I had friends in Australia, UK, USA, Canada…They were not learning Chinese, and I was a good listener. If you post your profile on this website, we can spread your message through our networks in China. You have no idea how many Chinese are learning English, and would love to have a penpal like you.

RULE NO.5: BE PREPARED BEFORE TALKING TO A STRANGER PENPAL LIVING IN CHINA

If your Chinese is fluent, then you do not need to be prepared.
Preparing for a talk/communication between you and a stranger friend living in China will allow you to practice some serious dialogue, ask some serious questions. You should write down something you would like to ask, or talk about, and check in dictionary to listen to the sounds. Nowadays, checking in an online dictionary is very easy. Preparation will not be that time consuming.

RULE NO.6: BE AWARE OF THE CULTURAL DIFFERENCES – DON’T BE OFFENDED

I have been a bridge between the western world and Chinese society for years, and I know how disturbing some cultural differences can be. Seriously! If you have never lived in China, you would not know. People like me, who have lived in another country with totally different cultural backgrounds could tell you many stories related to this kind of cultural differences between China and the western world. It’s not just the culture that is different, the level of living, lifestyles, economic and social development are also very different and they can be big obstacles of getting into another culture and society.

I have also lived in poorer countries for short period of time, like Nepal. It was much easier compared to my experience of living in California.

So I am not repeating what you have read and heard about the cultural differences, they are serious stuff, which can make you really angry and offended. Be prepared to that kind of experience. If you have never been offended by a conversation between you and a Chinese person, you are not there yet.

RULE NO.7: TRANSLATE SOMETHING EVERYDAY AND POST IT ONLINE

If you are not a good writer, then find a children’s book with simple grammar and written in easy words, and try to translate a few sentences everyday. Learning Chinese is not about keeping listening to tapes or watch teaching videos, it’s about memorizing new words and grammar. I don’t know why many language courses focus on listening and repeating, it should not be like that. I still beli

eve choosing right words is the most important process if you want to talk to a Chinese native. Just as my books have said, a native Chinese speaker is used to all kinds of accents, so your accent is the same as the wrong tone of many dialect speakers in our country. It will not cause much trouble.

If you can write good Chinese, your speaking skill will naturally improve.

RULE NO.8: INSTALL WECHAT ON YOUR SMART PHONE TO TALK TO A CHINESE FRIEND OR IN A GROUP

Using a smart phone to be connected to a group of Chinese or just one special Chinese friend is not only useful, but also fun. When I was learning English years ago, there was no such thing as smart phone. Internet was new to us but I found it so much more helpful than English textbooks and tapes. Nowadays we not only have portable computer – the smart phones, but also many apps that can be very helpful.

Why Wechat? What is Wechat?
It is an app developed by a Chinese company, similar to Facebook, but it is not blocked by our government. So it’s main advantage is that is can be used by both you and your Chinese friends. We do not have access to Facebook here, nor Twitter, Google…
Yahoo is available because of its connection to Alibaba.

How do we get connected to a group of Chinese English learners? Simple, just send us your Wechat ID through the comment form below, and we will bring you to our group which has already existed. Also, other groups organized by volunteers will invite you to their groups.

Learning a foreign language, especially a language with totally different origin like Chinese, can be very frustrating from time to time. Sometimes you feel you would never be able to talk to a local Chinese. Don’t give up. We all learned a foreign language that way. If I could learn English by myself, you could also! I had to work, I was under stress, I had no place to live, in a city I didn’t belong to…

Our course has made things easier for you as a beginner. We are not teaching the four tones, no Chinese characters, the Chinese words are written in Pinyin – letters you are familiar with. It is really not that difficult, as long as you listen to the right people.

What is your name?


How old are you?(you may just type "adult" if you prefer not to tell.)


Why are you learning Mandarin?


Where are you from? 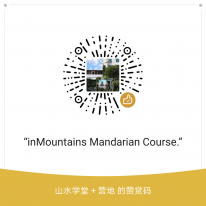